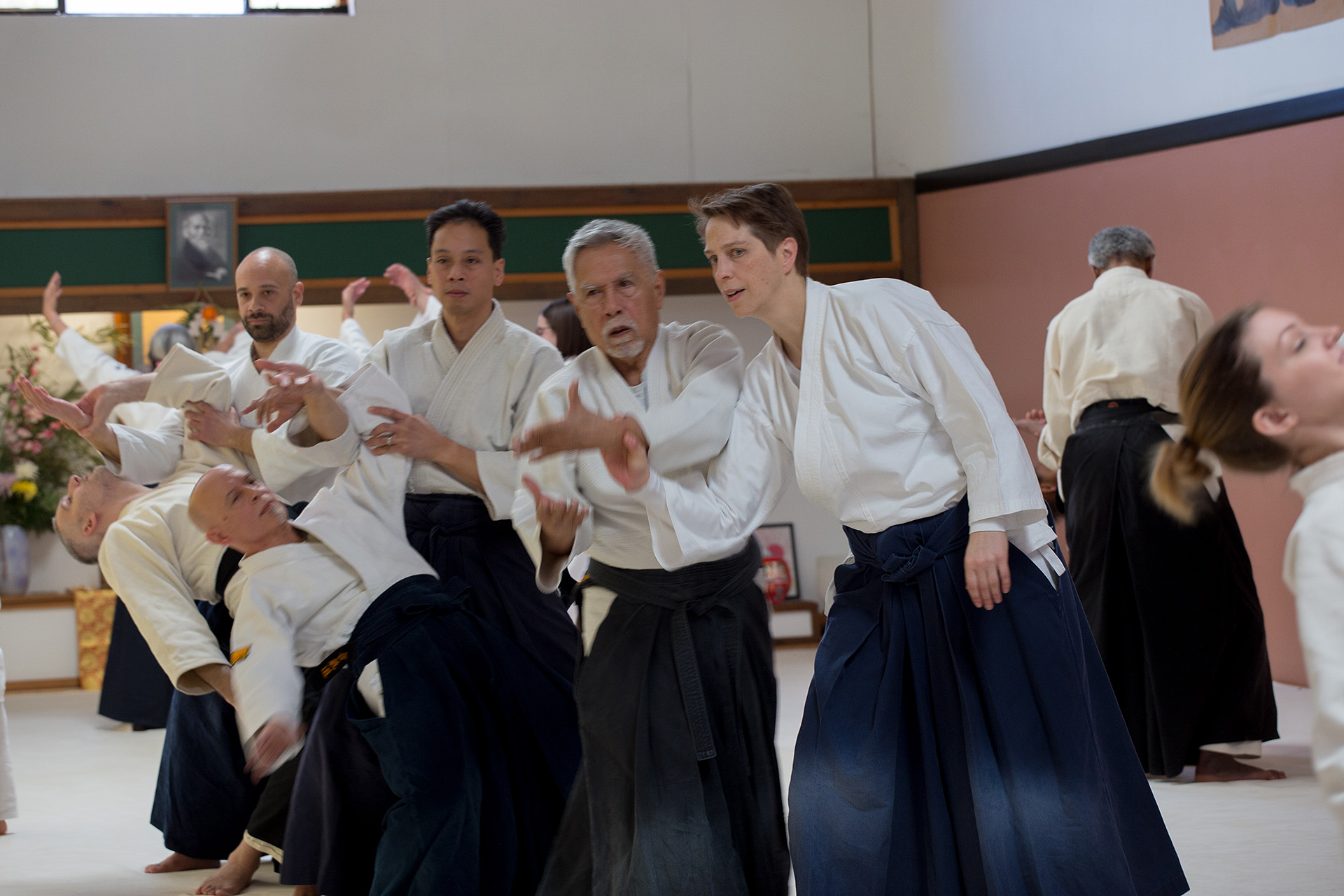 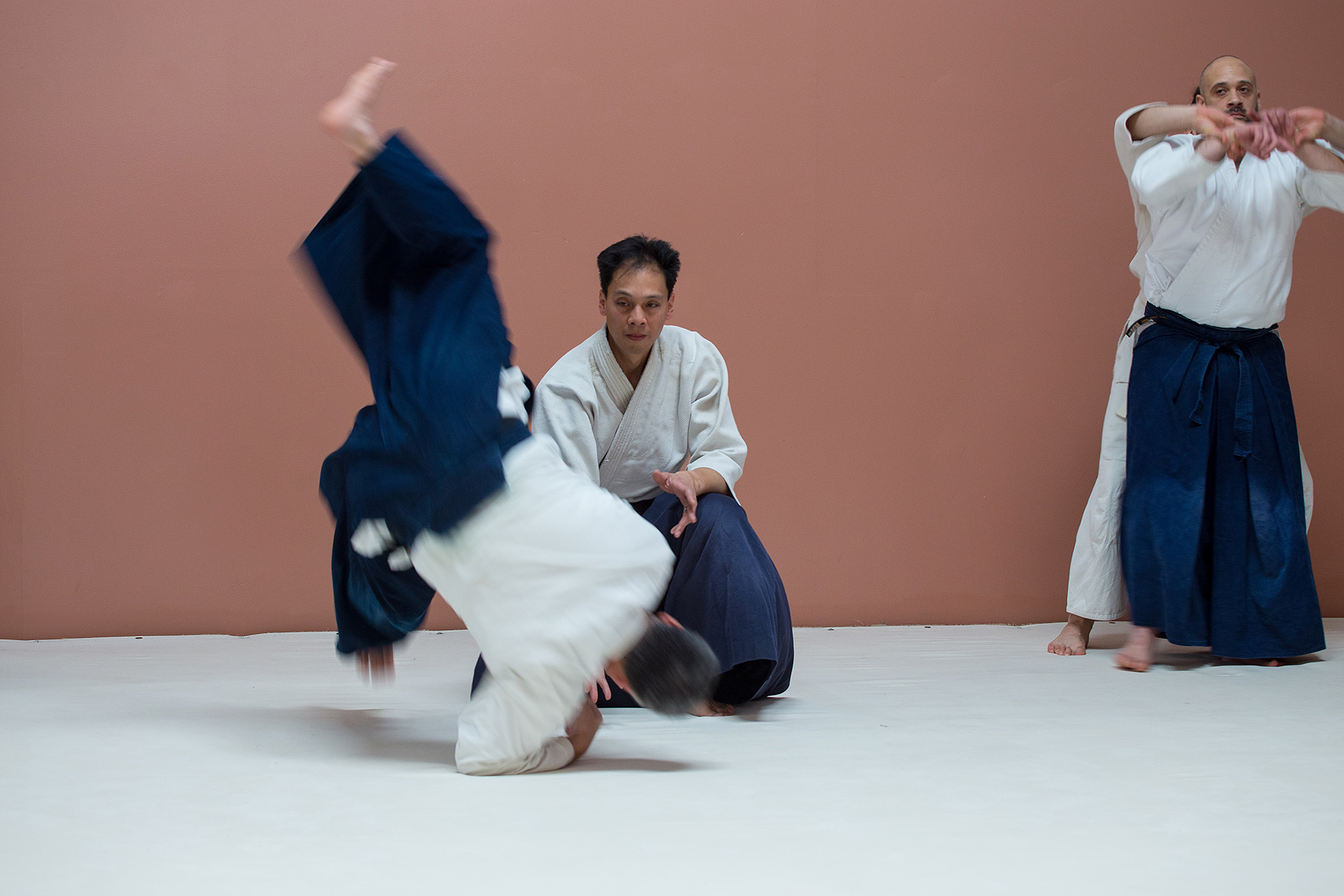 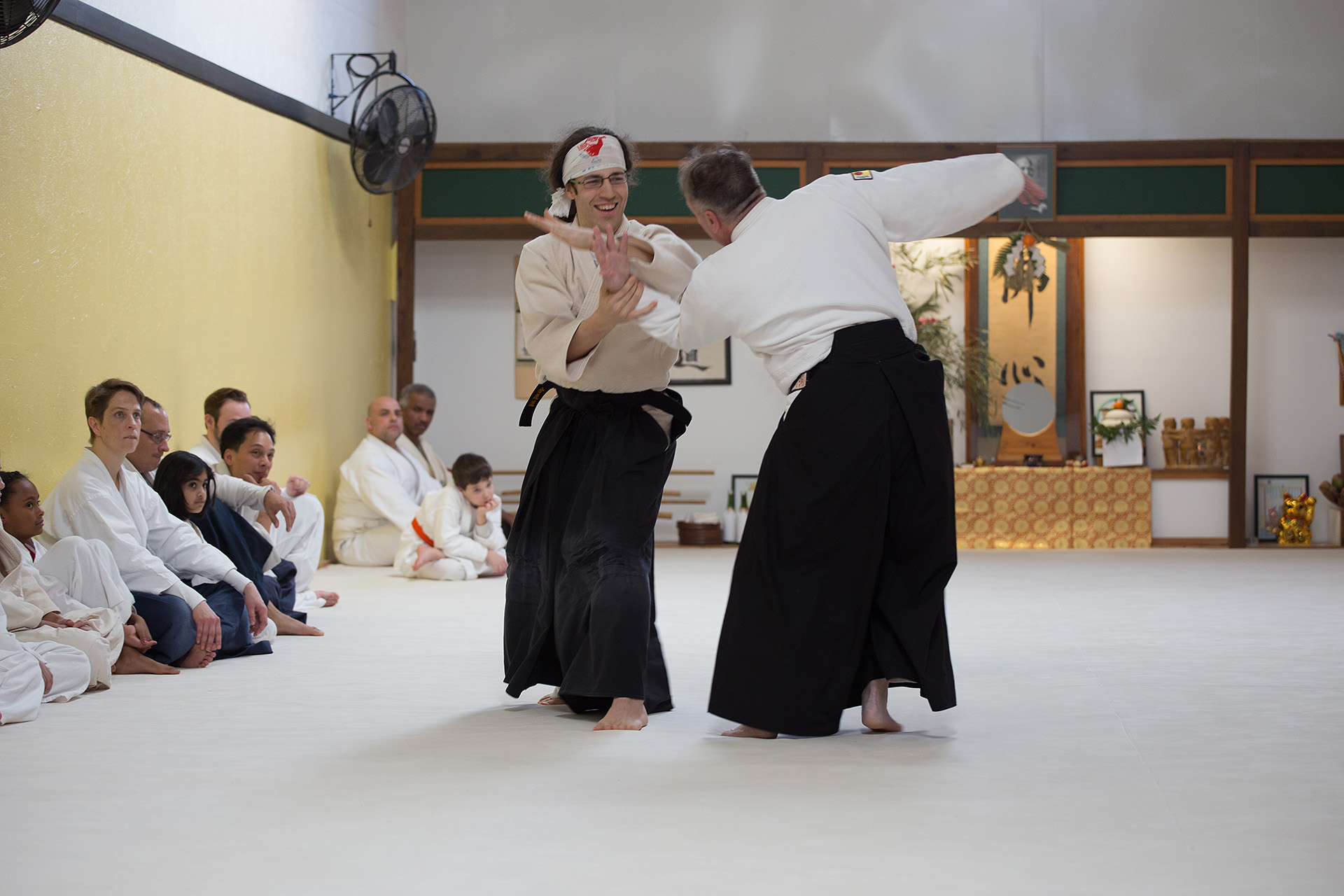 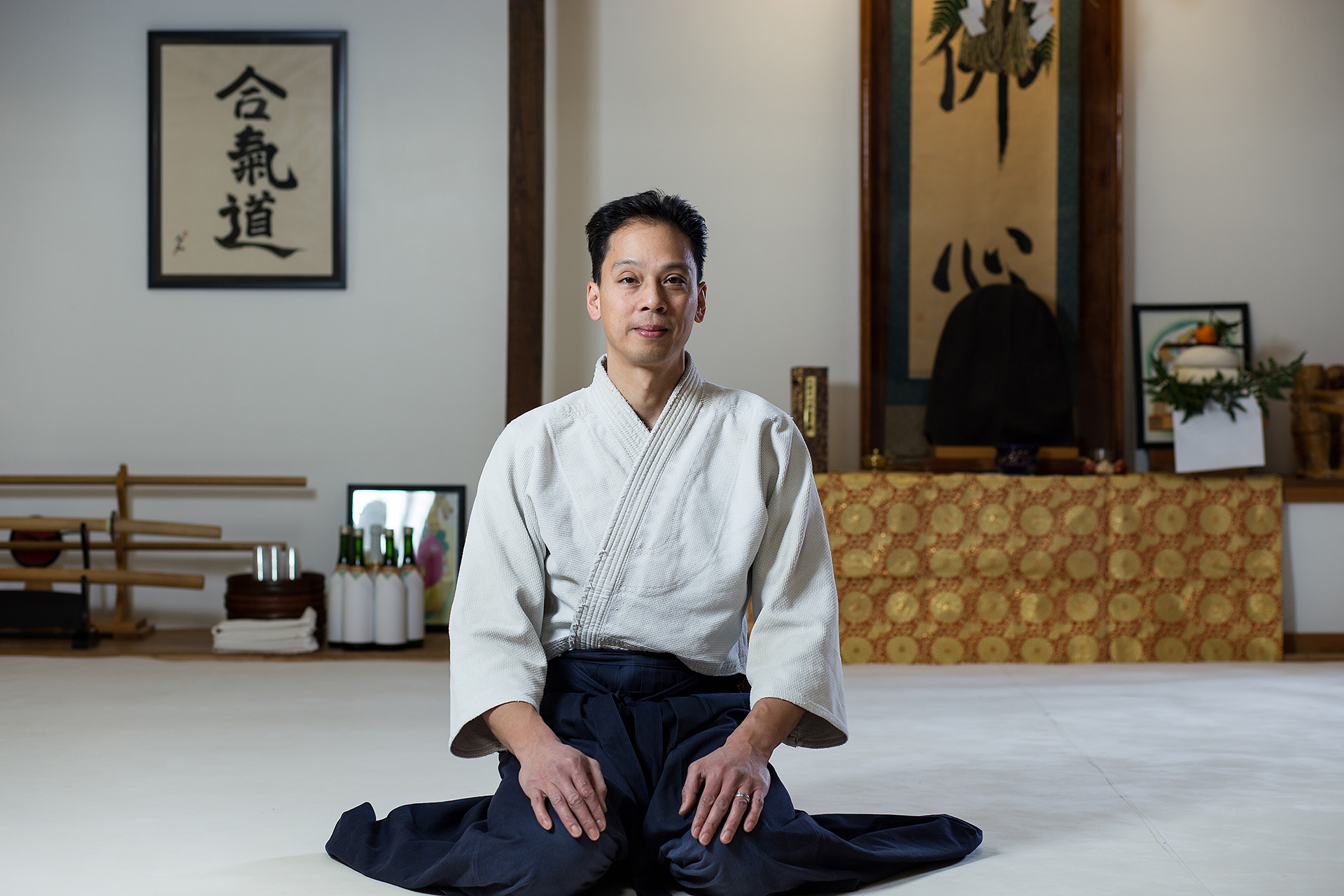 Mark Villasenor was raised in Delaware and having studied both Kempo and Arnis began his Aikido training in 1998 after being introduced to some of its concepts and techniques by his Kempo instructor, who also stated about Okimura Shihan. What drew Mark to Aikido were not only the effectiveness, beauty, and fluidity of the art by Okimura Shihan, but his personality and approach to teaching. Mark actively participates and assists in the coordination of the dojo yearly seminars and other events, as well as assists during scheduled classes. Mark received his promotion to Shodan in 2005, Nidan rank in 2008, and Sandan Fuku Shidoin instructors rank in 2013 under Okimura Shihan, conferred by Doshu Moriteru Ueshiba. As a Yudansha, Mark’s goals are to continue his personal development through Aikido training and to proliferate to people the Aikido teachings of Okimura Shihan in and out of the dojo. In addition to Aikido, Mark is also an avid cyclist, runner, guitarist, and windsurfer. Mark Villasenor currently works as a Nuclear Medicine Technologist in the State of Delaware. 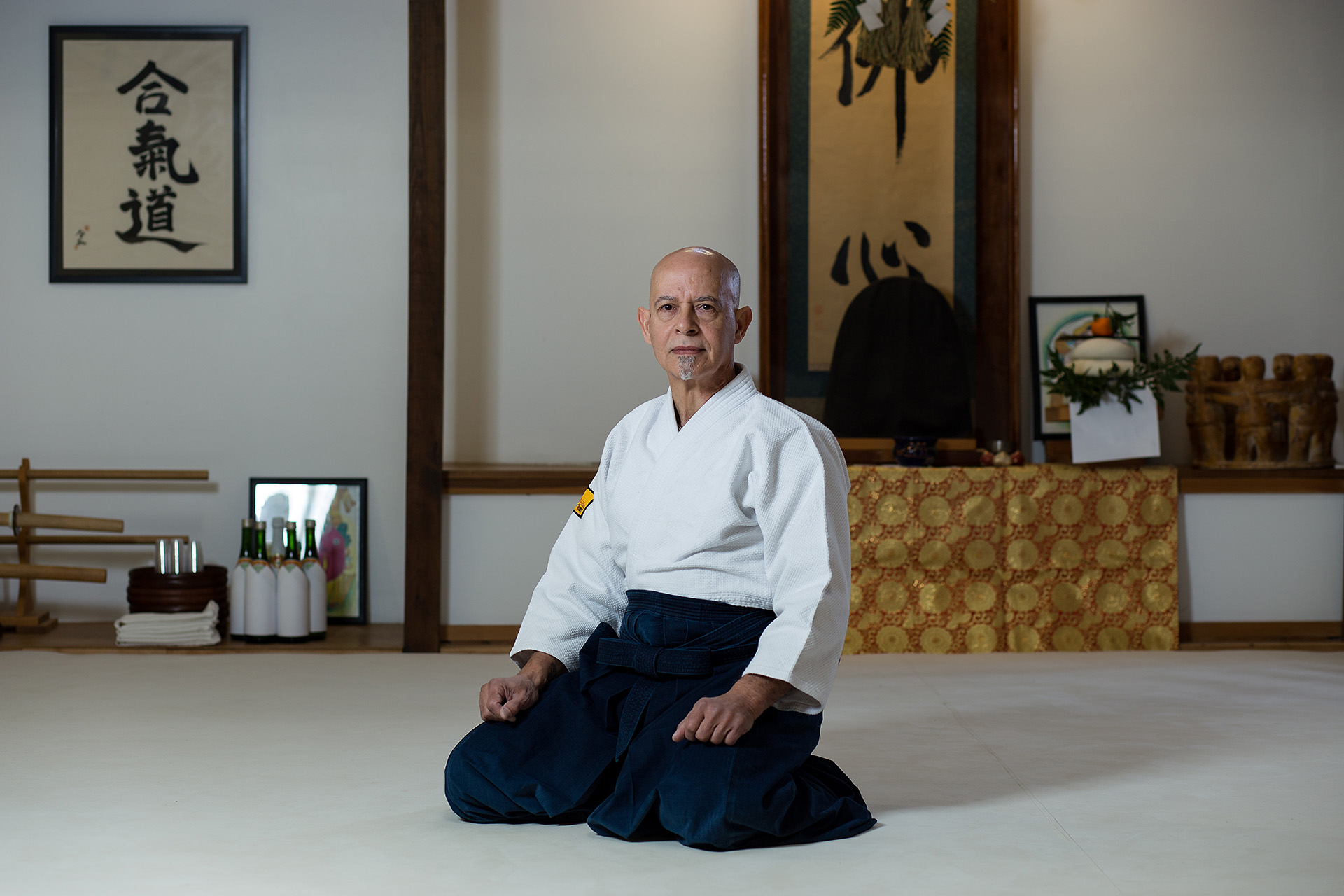 Frank Rodriguez began his martial arts quest in 1967 under the traditional teachings of Grand Master S. Henry Cho in New York City. In 1969, he earned the rank of 1 st degree Black Belt and in 1997 was promoted to 7 th degree Black Belt in Jidokwan Taekwondo. After moving his family to Delaware, Frank Rodriguez was privileged to meet Okimura Shihan in 1996 and was introduced to the world of Aikikai Aikido. Frank continues his Aikido training and assists Okimura Shihan in promoting Aikido in Delaware. He was promoted to Shodan (1st degree Black Belt) in 2005, the rank of Nidan (2 nd degree) in 2008, and currently holds the rank of Sandan Fuku Shidoin instructors rank since 2013. During his employment in the corporate world, Frank Rodriguez successfully held various managerial and project management assignments in a major corporate/investment bank, and in a chemical and manufacturing company. Frank Rodriguez is currently a licensed Therapeutic Massage Therapist in the State of Delaware. 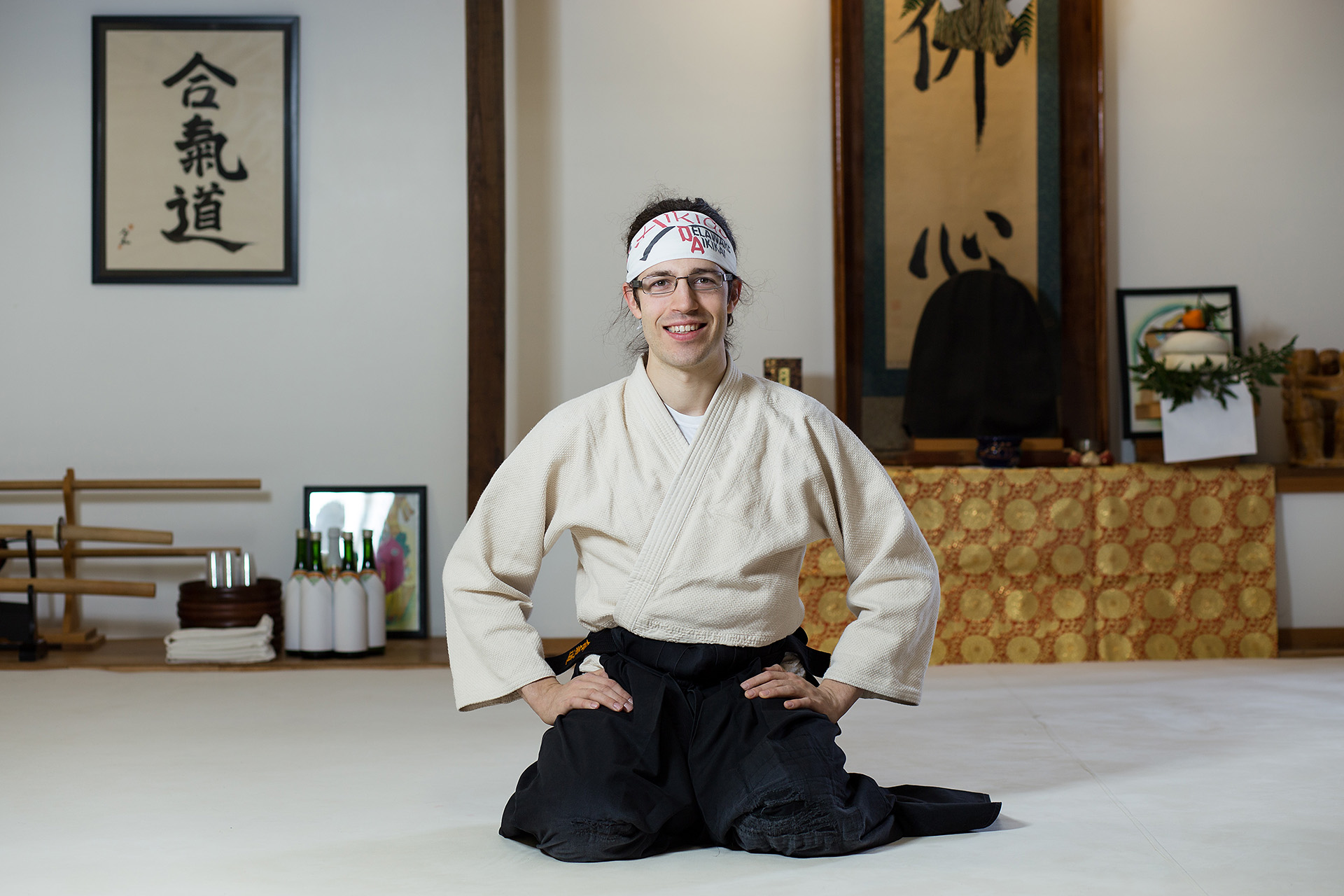 Joe Bennett was born in Delaware, and began his Aikido training at WAAI Headquarters- Aikido Delaware Aikikai under Okimura Shihan and Soofi Sensei in June of 2003. He received his promotion to Shodan in April of 2012 and to the rank of Nidan in May 2014, both under Okimura Shihan, conferred by Doshu Moriteru Ueshiba. Joe currently assists Soofi Sensei with the Aikido Kids classes. He believes that teaching kids Aikido is the best opportunity for improvement in our community. In his training Joe seeks to blend his techniques with love, compassion, and appreciation. Joe is a University of Delaware graduate with a Bachelor of Science in physics degree, and is currently a special education teacher at High Road School of Harford County in Belcamp, Maryland. He also enjoys composing music, learning new languages, and traveling. 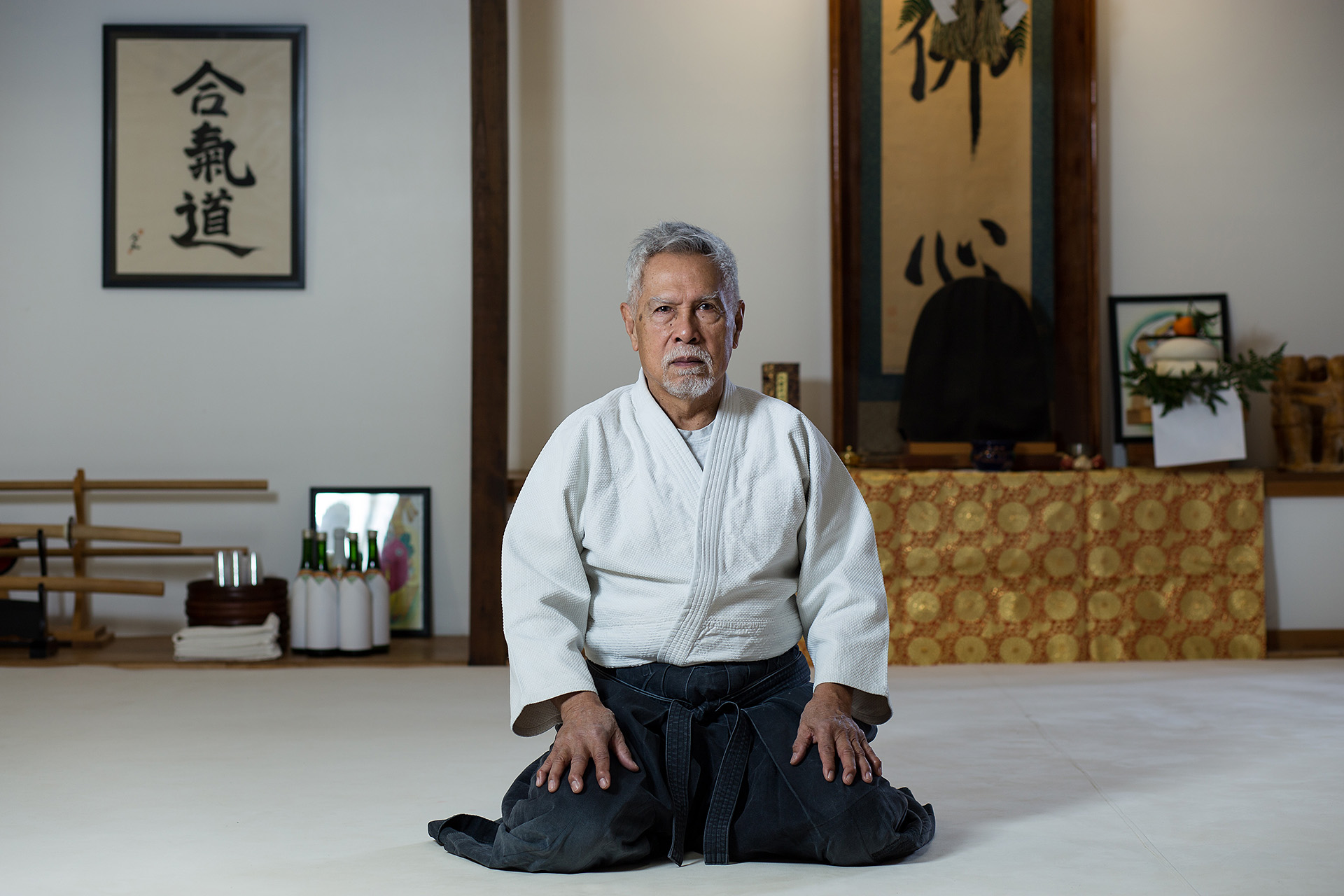 Marcos received his Aikido promotions, Shodan in 2012, Nidan in 2014 and Sandan in 2018 from the founder of WAAI, Okimura Shihan and conferred by Moriteru Ueshiba Doshu. His goal in Aikido is to gain a thorough understanding and fuller appreciation of the technical and spiritual underpinnings of the art in its on-and- off-the mat application. Prior martial arts experience has been in competitive Judo and Karate. Marcos retired in 2001, he was a physicist employed by the Federal Government. He worked for the Army Night Vision Laboratory and at the Army Research Laboratory. He was involved in the technical areas relating to multi-spectral imaging and non-imaging sensors for target acquisition. He served in the U.S. Air Force and as a volunteer in the U.S. Coast Guard Auxiliary. As a certified boating instructor by the Maryland Department of Natural Resources, and along with other members of the Auxiliary, he conducted boating safety courses for the public. Marcos and his wife of 50 years have helped and provided schooling support, nurturing, and guidance to children when they first came to the states and adjust to a new culture in America. Marcos and his wife share a common love for sailing, fishing, working on boats, support each other’s interest in travel, photography, and in the buying and selling of antiques and collectibles. Sailing as a hobby has been a big part of Marcos’ life. He finds a feeling of calmness and relaxation when he is on the open water. This is very similar to the feeling he experiences after an Aikido workout. 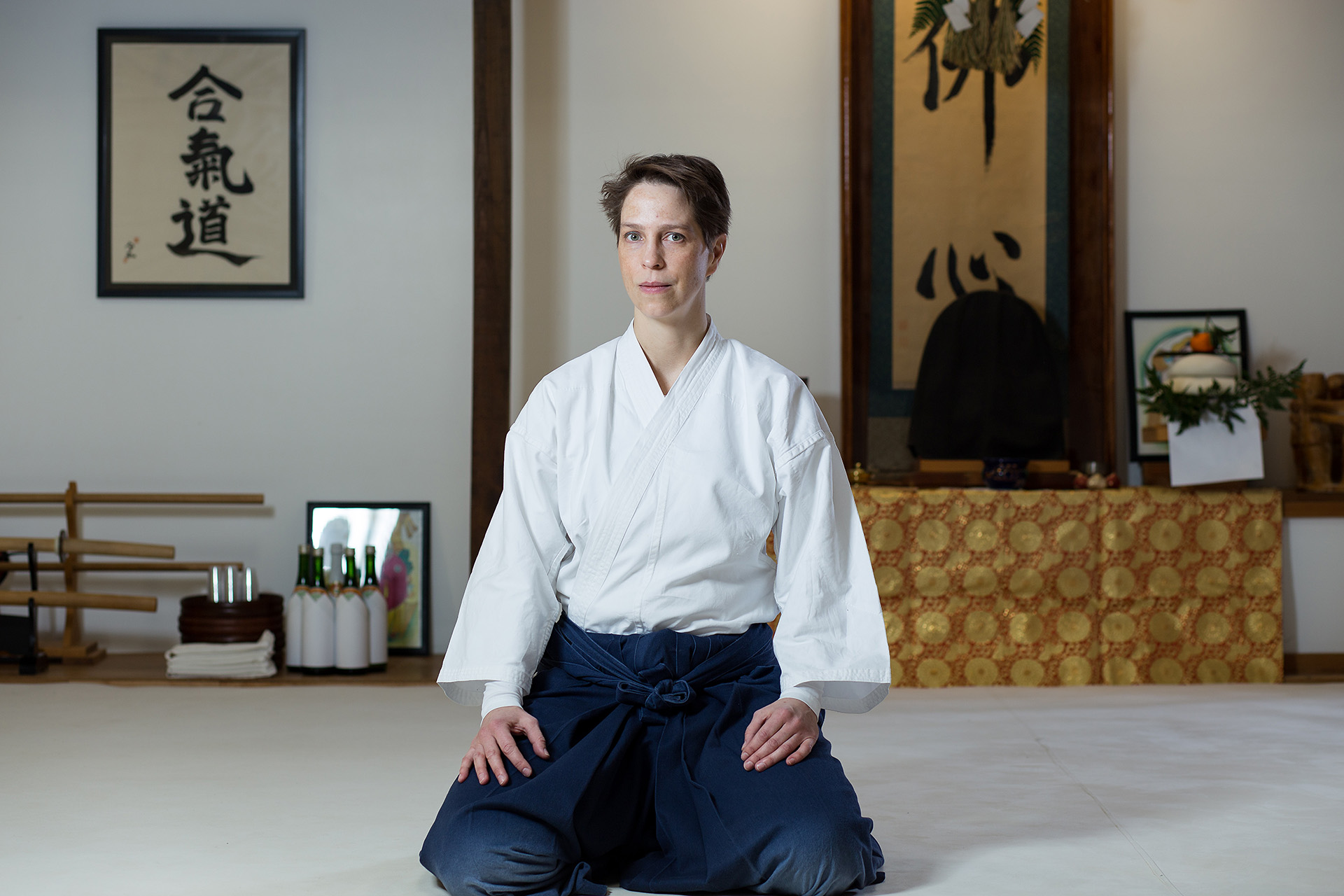 Birte has been attracted to the Japanese martial arts since her young age. Growing up in Germany, she practiced Judo for a few years as a teenager, and holds the rank of 2 nd Kyu. After obtaining her PhD from the Max Planck Institute for Chemical Ecology in Germany, she moved to the U.S. where she discovered Aikido in 2003 and fell in love with it. Due to many job-related moves, she had the opportunity to practice at the variety of the dojos throughout the years. Her most notable influences are Matsuoka Sensei (Ikazuchi Dojo), Arnold Shihan (Aikido Daiwa) and now Okimura Shihan (WAAI). This broad experience has given Birte an appreciation for the different styles and technical variations in Aikido that truly make this art unique. An important goal in her continuing training is to understand how to employ the principles of Aikido in every day life. She commutes from Delaware to her job in New Jersey where she works in Medical Affairs in the pharmaceutical industry, and makes practices as often as possible, and while time permits enjoy assisting with the Aikido Kids classes. At this time, Birte holds the rank of Shodan, conferred by Moriteru Doshu in 2014. 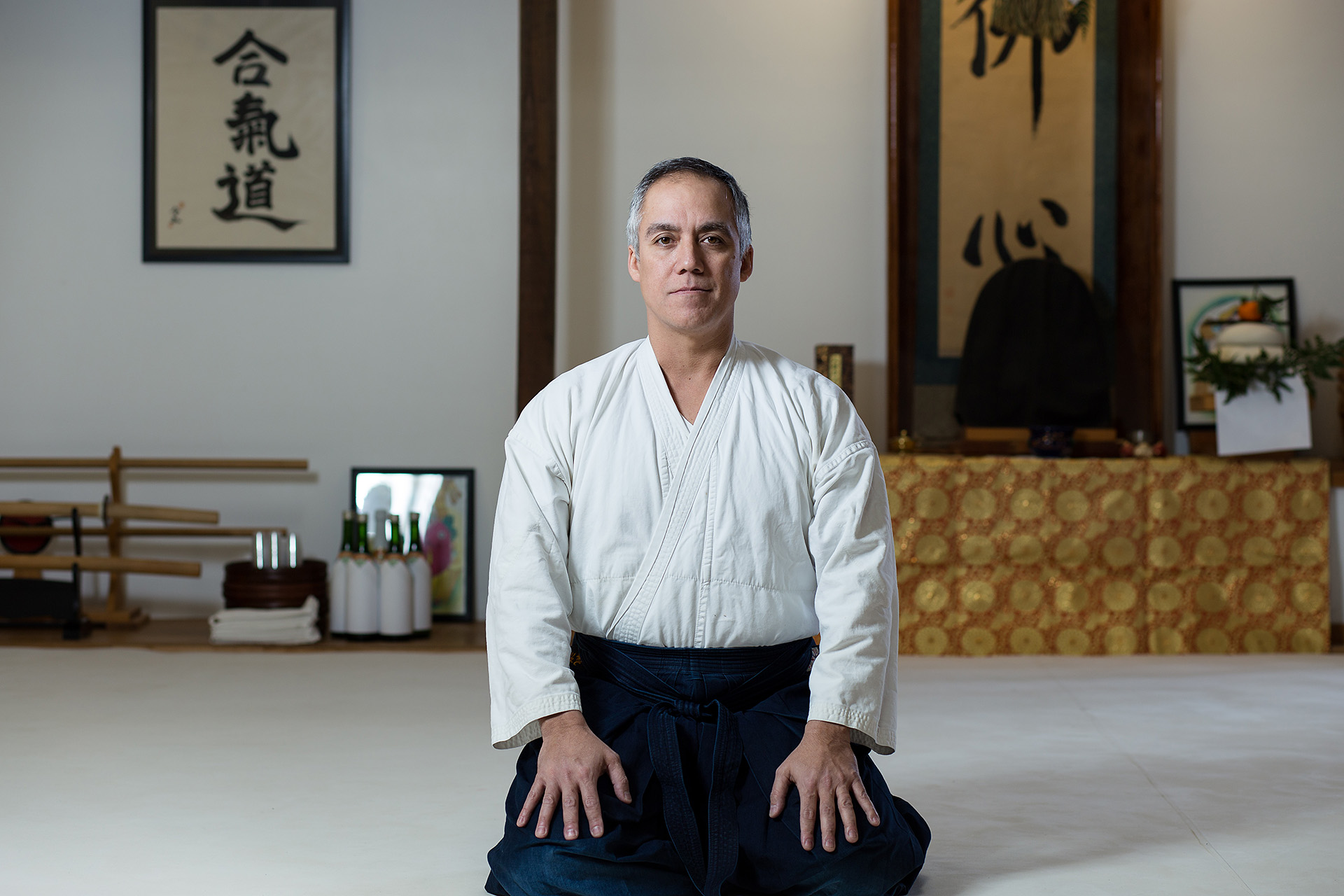 Paul was raised in upstate New York and graduated from Villanova University in 1994. After several years of reading about Aikido and Aiki Principles, he began to practice at Aikido Delaware Aikikai in 2010. In February of 2011, Paul had the unique opportunity to travel with Okimura Shihan to Aikido Celebration 2011 - Commemorating the Silver Bridge of Harmony between Japan and Hawaii. It was here that he had the opportunity to meet Aikido practitioners from around the world and gain insight into the direct connection between Okimura Shihan and the Ueshiba Family. He is grateful that we are uniquely blessed to have a direct Aikido lineage to O’Sensei and Doshu Kisshomaru Ueshiba through Okimura Shihan. Paul enjoys practicing Aikido both on and off the mat. As an Entrepreneur and business owner, sometimes it can feel like people are “attacking” from all directions. He credits Aikido for the ability to remain centered and balanced through challenging business scenarios. Several co- workers have joined him on the mat and it has provided them the opportunity to explore “Corporate Aikido”. Paul received his promotion to Shodan in 2015 under Okimura Shihan conferred by Doshu Moriteru Ueshiba. As a Yundasha, he looks forward to sharing the Aikido teachings of Okimura Shihan and continuing to grow physically, mentally, and spiritually through dedicated Aikido practice. The Aikido Kids Program is also very important to him as his young children begin to join him in the Dojo. Because of the special learning environment created by Okimura Shihan and Zohreh Soofi Sensei, the members of Aikido Delaware Aikikai have truly become his Aikido Family. Paul looks forward to welcoming new members and sharing all the Aikido gifts he has been given. 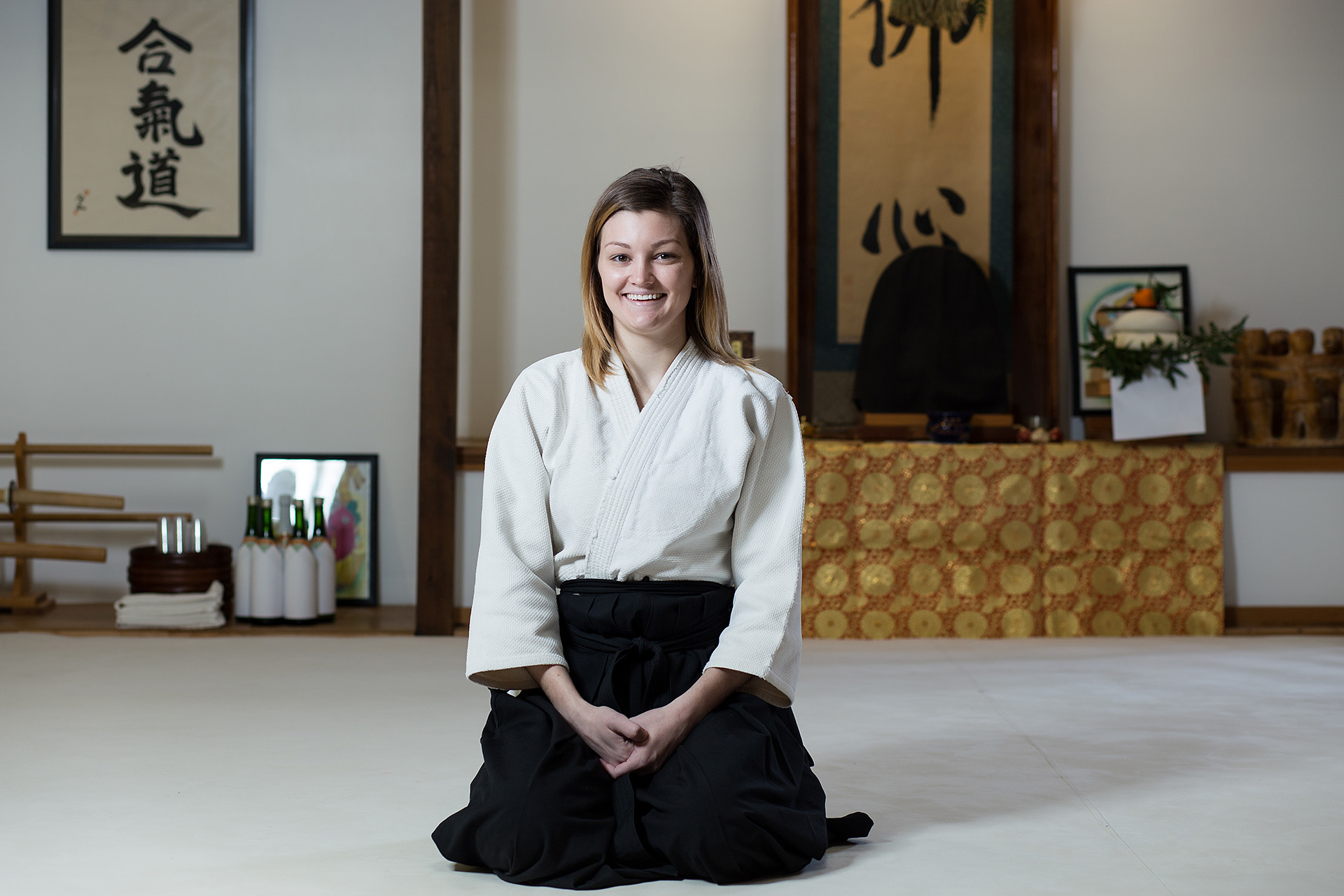 Jennifer was born and raised in Newark, Delaware. She began her Aikido training in 2011 under Okimura Shihan and Zohreh Soofi Sensei at WAAI Headquarters- Aikido Delaware Aikikai. She was introduced to the art during her senior year at the University of Delaware, and remained committed to her training after graduating with a Bachelor degree in Interpersonal Communication. Jennifer actively trains at her dojo; also she is a supportive participating member to the yearly held seminars and other events. She wishes to support WAAI by attending other seminars and events. Her goal in Aikido is to continue learning with a beginner’s mind and an open heart. Jennifer received her Shodan under Okimura Shihan and conferred by Moriteru Doshu in 2017. She and her husband work and live in Newark with their two adopted dogs.